A Party to Win: The Path to Working-Class Political Power (Verso 2022)

2021    “The Rise and Fall of Social Democracy,” Labour/Le Travail (Accepted)

2018    “Return of the Strike: A Forum on the Teachers’ Rebellion in the United States,” with Tithi Bhattacharya, Kate Doyle Griffiths, and Lois Weiner, Historical Materialism 26 (4): 119–163

2021    “Rethinking the Russian Revolution from Across the Empire,” Marxist Sociology Blog (Marxist Section of the American Sociological Association), July 14, 2021.

2020    “We Were Right To Celebrate Trump’s Defeat. Now We’ll Have To Stay in the Streets for the Next 4 Years,” Jacobin, November 8

2020    “Billionaires Want to Reopen Schools Amid a Pandemic. They Might Unleash a Teacher Strike Wave,” Jacobin, July 26

2020    ““The Most Effective Way to Stop Police Terror Is Action at the Point of Production – Interview with Clarence Thomas,” Jacobin, June 9

2020    “Mike Bloomberg’s Education ‘Reforms’ Would Be a Disaster for Public Schools,” with Heather Gautney, The Guardian, February 17

2020    “Students With Disabilities Deserve a Quality Education. Bernie’s New Disability Rights Platform Would Give Them One,” Jacobin, February 7

2019    “Why We Confronted Joe Biden on Deportations – Interview with Carlos Rojas,” Jacobin, November 22

2019    “A Strike for Racial Justice and Democracy in Little Rock Schools,” Jacobin, November 14

2019    “The Chicago Teachers Strike Proves We Can’t Rely on Democrats,” The Nation, October 19

* Nominated for the John Swett Award for Media Excellence *

2019    “LA’s Teachers Can Teach the Working Class about the Power of Labor Strikes,” with Meagan Day, The Guardian, January 14

* Nominated for the John Swett Award for Media Excellence *

2018    “The Outcome in Arizona – Interview with Rebecca Garelli, Dylan Wegela, and Noah Karvelis” Jacobin, May 3

2014    “National Liberation and Bolshevism Re-Examined: A View from the Borderlands,” Links: International Journal of Socialist Renewal, May 28

“The LA Teachers’ Strike: How They Won and What Comes Next” Center for Social Theory and Comparative History, UCLA 2/21/19

“The Teacher Strikes: Takeaways for the Progressive Movement and Consequences for the Future of Public Sector Employment” Plenary Presentation to the Economic Policy Institute’s 2018 EARN Conference, 10/4/18 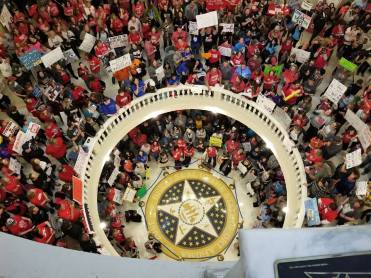